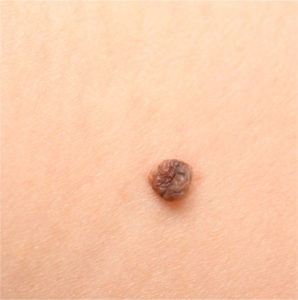 Moles are very common and can be found all over the body. They are made up from a collection or clusters of skin cells called melanocytes which produce the colour or pigment in the skin. They are usually small lesions on the skin that are normally brown, but they may be black, blue, pink or skin-coloured. Moles can be flat or become more raised as we age and people with light or fair skin will often have more moles than people with darker skin. The average adult will have around 30 moles by the time they are 30 years of age. Any mole appearing after the age of around 40 should be treated with suspicion and checked regularly. If in any doubt, see your GP as Malignant Melanomas are the fastest-growing skin cancer. They are killers and should be taken very seriously.

Moles can change in number and appearance and although less common, some moles may fade away or disappear completely later in life, often you won’t even notice. They also sometimes respond to hormonal changes, for example during pregnancy, when moles can become slightly darker or become more pronounced in appearance.

Treatment & Removal of Moles at Skin-hub

Moles are treated using Advanced Cosmetic Procedures, a form of advanced electrolysis which is a very safe and effective method of mole removal. These simple treatments are purely cosmetic and are only used to treat normal healthy moles i.e. moles which do not need to be removed for medical reasons.

During the treatment process, there are no injections, incisions, stitches, no bleeding and no chemicals or lasers. The treatment itself involves using a needle the size of an eyelash which is blunt at the tip. At that tip of the needle, some heat and radiofrequency is used to intricately cauterize the tissue of the mole. As all moles are different, some can be taken off immediately and others will scab up and drop off around 7-10 days later. Moles that are perfectly flush with the surrounding skin and dark in appearance may not be suitable to treat. This is due to the pigment or colour of the cells being deeper, potentially too deep to not leave a scar. But if you are unsure you can make use of the free consultation here at Skin-hub for further advice.

* PLEASE NOTE: I am unable to treat an person who is either pregnant / could be pregnant, or has a Pacemaker or a Defibrillator fiited.

There are many different kinds of moles. Some moles may be confused with other skin conditions such as freckles and warty growths on the skin. Moles that you are born with are called congenital moles and those that grow after birth are called acquired moles.

Here are a few different types of mole:

• Melanoma is the fifth most common cancer in the UK.
• Around 13,500 new cases of melanoma are diagnosed each year and it’s on the rise.
• More than 2,500 people die every year in the UK from melanoma.

Most moles are completely harmless, but in a few rare cases, they can develop into malignant melanomas. Malignant melanoma is the most aggressive and the most serious type of skin cancer. The cause of malignant melanoma is complex, a mixture of genetic factors and the environment. Melanomas may not be necessarily caused by excessive sunbathing, they can occur on parts of the body that have never been exposed to the sun. But bear in mind that the darker coloured anything is, the more it attracts the suns harmful UV rays. So the darker the mole, the more potent and harmful the suns UV rays will be and hence the more risk of it mutating over prolonged and concentrated sun or sunbed exposure.

A malignant melanoma may appear anywhere on the body. It may be a dark, fast-growing spot where there was not one before or a pre-existing mole that changes size, shape or colour, which may also in later stages of the disease redden, itch or bleed.

You should regularly check all your moles for any changes. A change in a mole can occur in weeks but in some moles it may take much longer. Most moles are harmless and will never cause any problems. Some moles however can become sore or inflamed if you damage them or if you pluck the hair out. As some moles are capable of developing into skin cancer, it’s a good idea to check your moles regularly so that you’re aware if they change shape or colour. See your GP if you notice:

! The next item is direct from the British Association of Dermatologists website ABCDE-easy guide to checking your moles:

There are different types of skin cancer and all look different. The following ABCDE-easy rules
show you a few changes that might indicate a ‘melanoma’, which is the deadliest form of skin
cancer. As skin cancers vary, you should tell your doctor about any changes to your skin, even if they
are not similar to those mentioned here.

Remember – if in doubt, check it out! If your GP is concerned about your skin, make sure you see a Consultant Dermatologist, the most expert person to diagnose skin cancer. Your GP can refer you via the NHS.

Asymmetry – the two halves of the area may differ in shape

Border – the edges of the area may be irregular or blurred, and sometimes show notches

Colour – this may be uneven. Different shades of black, brown and pink may be seen

Diameter – most melanomas are at least 6mm in diameter. Report any change in size, shape or
diameter to your doctor

Expert – if in doubt, check it out! If your GP is concerned about your skin, make sure you see a
Consultant Dermatologist, the most expert person to diagnose skin cancer. Your GP can refer
you via the NHS

Skin Hub Blemish Removal including moles in Winchester which is handy for our clients in Southampton, Basingstoke, Portsmouth, Andover, and Salisbury. We are also only a short trip down the M3 motorway or train journey from Reading and London. Call us on 0330 107 0507 or 07872 058949 to book your appointment. Or book online via the website