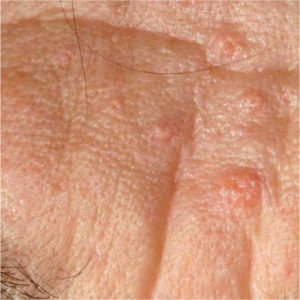 Not the most common treatment I perform, but certainly the one people travel the farthest for.

What is Sebaceous Hyperplasia?

Often found in siblings and parents, ‘Sebaceous’ refers to the glands within the skin responsible for secreting an oily substance called sebum. ‘Hyperplasia’ simply means enlarged or raised. So if you have raised, skin coloured, small and sometimes doughnut-shaped bumps on the face and forehead areas, oily skin and are over the age of say 35, you may very well have Sebaceous Hyperplasia. It’s more common on the forehead and the cheeks. If it’s worse on one side of the face, it’s usually the side a person sleeps on.

There may even be a particular mirror that they seem to look worse in. It’s not the mirror, it’s where the light is coming from. As an example, if you were to hold a mirror in front of you, then slowly turn all the way around to where you first started, you would notice them seem to appear and disappear. This is purely the light casting shadows from certain angles. Light from above can be equally unforgiving.

Apart from this condition caused by an overproduction of sebum (oil) in the glands, usually being inherited in the genes you’re handed at birth and potentially being hormonal, there’s not a lot else we can blame for Sebaceous Hyperplasia, as little is known. However, after speaking with and treating many people, I have personally come to the conclusion that stress plays a major factor in their production. This often makes sense to clients who have had a particular episode of stress before they first noticed their skin condition. Or, they already had Sebaceous Hyperplasia and the stress made the condition much worse.

Can it be cured for good?

No. But it can be managed very successfully and kept at bay for 12-18 months at a time. Managing it is the key to an even skin and smoother complexion. Left untreated they become larger, more noticeable over the years and more appear. Usually, the bigger sebaceous hyperplasia are the oldest. But, for a simple treatment on average taking around 15 minutes once every year or so, it’s an investment well made in both your appearance and your self-confidence.

Note: One of my clients, whom I have treated several times over the past 8 years or so, believes that certain B vitamins may help. His findings from speaking to people on internet forums indicate that excessive oil production may be controlled better by taking vitamin B5 (Pantothenic Acid). B5 has undoubtedly helped this gentleman with reducing the excessive oil production he suffered from and it may also help acne sufferers. Also, recent research has shown that vitamin B3, can when applied topically, help to reduce both oil production and pore size.

Firstly, don’t be taken in by claims that microdermabrasion, skin peels, freezing (cryo) and laser treatments would be a suitable remedy. They won’t and some can do more damage than good. The single best treatment is diathermy.

Diathermy involves using a small needle the size of an eyelash, which is blunt at the tip and releases heat at a controlled rate. This, in turn, cauterises the overgrowth of tissue which then forms a scab. After usually 7-10 days the scabs drop off revealing a smoother and more even complexion. Gradually over the coming weeks, the skin regenerates further.

Just to confirm, there are no….
• Injections • Freezing • Chemicals • Lasers • Bloods • Scars

* PLEASE NOTE: I am unable to treat an person who is either pregnant / could be pregnant, or has a Pacemaker or a Defibrillator fiited.

Treatment usually costs arround£100 (depending on how many a person has) Only £60 if treatment is no more than 5 minutes (approx 25-30 lesions).

Prices are fixed to reflect the actual treatment time taken. For example: If you have a 30-minute consultation and during that time you have a treatment to remove a couple of blemishes which takes 5 minutes or under, the cost is just £50. You are only charged for the hands-on time taken for the treatment itself.

Skin Hub Blemish Removal including Sebaceous Hyperplasia in Winchester which is handy for our clients in Southampton, Basingstoke, Portsmouth, Andover, and Salisbury. However, for this condition, we have treated clients from all over the UK including as far afield as Leeds, Manchester, Nottingham, Birmingham and even Scotland, Wales & Ireland. Call us on 0330 107 0507 or 07872 058949 to book your appointment.