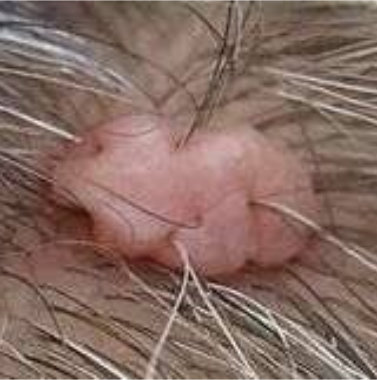 A Sebaceous Nevus (Naevus) is a type of birthmark that is mainly found on the scalp. They are usually tan, yellow or pink in colour and consist of a number of malformed sweat and oil glands, along with an overgrowth of connective tissue of the top layers of the skin – the epidermis. They occur for no apparent reason and usually before birth through defective genes. In an infant or young child, Sebaceous Nevus are usually a solitary, smooth, yellow-orange patch of skin. They become more prominent around adolescence, often appearing bumpy, warty or scaly and worldwide they can affect 1-3 per 1000 births.

All lesions treated here at Skin-hub are purely for cosmetic purposes. There are various forms of Sebaceous Nevus and some may be unsuitable for treatment. Most I see however are able to very easily and effectively be removed using this simple procedure.

Dependent on whether the growth is flat to the skin or raised the process can differ slightly, but the principle is generally the same. A small needle the size of an eyelash and blunt at its tip is used to apply some heat and radiofrequency to the lesion. If it is already quite flush with the skin, it is treated with a lot of taps onto the tissue in a certain way at a certain setting. A scab then forms and drops off around 7-10 days later. If however the lesion is raised enough to be able to hold or almost hold with tweezers, it can sometimes be removed there and then. Again a small scab forms where it used to be which also drops off around 7-10 days later. They won’t grow back.

Skin Hub Blemish Removal including Sebaceous Nevus in Winchester which is handy for our clients in Southampton, Basingstoke, Portsmouth, Andover, and Salisbury. We are also handy for clients in Reading and London, just a short trip by train or down the M3 motorway. Call us on 0330 107 0507 or 07872 058949 to book your appointment.